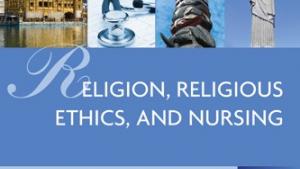 [This] is a book that challenges you to step back and broaden your thinking about religion in general and religion in nursing...Nurses at all levels will appreciate the applications to nursing practice, theory, and research."--Journal of Christian Nursing

The Reverend Dr. Marsha Fowler and her colleagues have written a landmark book that will change and enlighten the discourse on religion and spirituality in nursing. The authors address the awkward silence on religion in nursing theory and education and with insightful scholarship move beyond the current level of knowledge and limited discourse on religion in nursing theory, education and practice. This book is path-breaking in that [it] gives many new ways to think about the relationships between ethics, health, caregiving, moral imagination, religion and spirituality.

From the Foreword by Patricia Benner, PhD, RN, FAAN
Professor Emerita of Nursing
Department of Social and Behavioral Sciences and Nursing
University of California, San Francisco

The past 25 years have witnessed an escalating discussion on the role of spirituality within health care. This scholarly volume is rooted in the belief that not only is religion integral to nursing care, but the religious beliefs of both nurse and patient can significantly influence care and its outcome. It offers an in-depth analysis of the ways in which religion influences the discipline of nursing, its practitioners, and treatment outcomes.

Through the contributions of an international cadre of nurse scholars representing the world's major religious traditions, the book explores how theories, history and theologies shape the discipline, bioethical decision making, and the perspective of the nurse or patient who embraces a particular religion. It examines the commonalities between the values and thinking of nursing and religion and identifies basic domains in which additional research is necessary. The authors believe that ultimately, scholarly dialogue on the relationship between religion and nursing will foster and enhance nursing practice that is ethical and respectful of personal values.