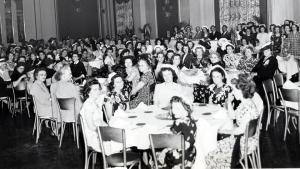 A spontaneous work of the Holy Spirit among nurses began in the mid 1930's and early 1940's. In Chicago, three nurses met to pray at Children's Hospital. By May 1935 the group had grown and spread to other hospitals. A steering committee of 19 nurses met at Lawson YMCA to consider establishing an organization to meet the spiritual needs of nurses. They began as the Christian Nurses Fellowship, with Alvera Anderson, a public health nurse, as first chairperson. They continued to meet monthly at First District Illinois Nurses Association Headquarters in Chicago. Similar developments occurred in other areas. Students affiliating in Chicago discovered these groups, and often started one in their own hospital upon returning. City-wide fellowships also developed in Minneapolis, Flint, Philadelphia and San Francisco in the early 1940's. Most called themselves Christian Nurses Fellowship (CNF).

The first Christian Nurses Fellowship conference was held in 1946 at Round Lake Conference Grounds in Illinois. By the following year Christian Nurses Fellowships were meeting in eight metropolitan areas. Students who met CNF in Chicago and others cities often wrote later for personal help or to ask how to start a group. This need for a person to devote full-time to handle correspondence and encourage those starting groups and citywide fellowships became evident.

A national movement formed in 1948. Alvera Anderson, who was already in correspondence with nurses elsewhere, became General Secretary for CNF. In November of the same year Tressie Myers, a head nurse and instructor at Michael Reese Hospital in Chicago, became the first traveling staff member. Alvera Anderson spearheaded the movement in its formative years, and then returned to public health and school nursing in 1951. Tressie Myers then became General Secretary (later to be retitled Director) of CNF, a post she retained until her retirement in 1968.

The purposes and doctrinal positions of CNF closely resembled those of InterVarsity Christian Fellowship. Consequently, CNF united with IVCF at the time of its official formation.

By early 1951 the National Committee of CNF questioned if the name Christian Nurses Fellowship implied that the organization was only for Christian nurses. They wanted all nurses to feel welcome at the CNF meetings. After thoughtful discussion and prayer, they changed the name to Nurses Christian Fellowship in 1952.

Read the personal reflections of Tressie Myers on God's faithfulness in celebration of the 25th anniversary of NCF ministry in September 1973.

In July of 1951 the first official publication of CNF began as a mimeographed four-page quarterly entitled the CNF Bulletin. It was edited by Cornelia Knight, Thelma Marshall and Frieda Zuckerman. In October it became The Lamp. By 1953 the publication became bi-monthly. In 1958 the name was changed to The Nurses Lamp. Editors included Grace Wallace, Marian Hall and Judy Shelly. In September 1984 the bi-monthly publication ceased with the advent of the quarterly magazine, the Journal of Christian Nursing. This was first edited by Ramona Cass, then beginning in September 1990 by Judy Shelly. Kathy Schoonover-Shoffner became editor beginning with the Summer 2004 issue.

NCF Press began in 2002 with the publication of Nursing in the Church (Shelly, ed), followed by a series of Bible study guides based on Called to Care. Subsequent publications include Caring Across Cultures (Grace Tazelaar, 2004), The Garden of My Heart (Skip McDonald, 2005) and The Nurse with an Alabaster Jar (Mary Elizabeth O'Brien, 2006).

In 1967 a vision held by Tressie Myers and other NCF nurses became a reality when an ad hoc sub-committee of the National Advisory Committee met to explore the need and design research to develop materials pertinent to nursing. In August 1968, two committees funded by the Lilly Foundation analyzed the data to develop papers on a Christian philosophy of nursing and defining spiritual needs of patients. Refinement and further research enhanced NCF workshop content. A ten-year plan developed in 1971 included curriculum development and a strong witness to the nursing profession. Ruth Stoll, a faculty member at the University of Kentucky and former NCF staff worker, was appointed as NCF's first Curriculum Specialist.

The ten-year plan became a reality as NCF began to produce numerous written, audiovisual and workshop resources. Manuals were developed for workshops such as Persons in Crisis, Love That Heals, What Is Man?, Anxieties in Nursing, The Nurse as a Whole Person, Spiritual Care, Hope in Suffering, and Grieve, But Not as Those Who Have No Hope, and reproduced across the U.S. and in other countries.

Over the years, NCF staff members have written numerous Bible study guides related specifically to nursing. InterVarsity Press subsequently published many of those guides, such as Standing Orders, Rough Edges (both by various staff), Lifestyle of Love, by Mary Thompson, Caring in Crisis, by Judy Shelly and the Caring People series by Phyllis LePeau.

Sharon Fish and Judy Shelly began writing textbooks in 1976. Spiritual Care: the Nurses Role, released in 1978, is now in its third edition and is also published in German, Norwegian, Portuguese, Chinese, Japanese and Korean. Other books followed - Dilemma: A Nurse's Guide for Making Ethical Decisions (Shelly, 1980), The Spiritual Needs of Children (Shelly and others, 1982), Spiritual Dimensions of Mental Health (Shelly and Sandra John, 1983), Not Just a Job: Serving Christ in Your Work (Shelly, 1985) and Values in Conflict: Christian Nursing in a Changing Profession (Shelly and Arlene Miller, 1991), Called to Care: A Christian Theology of Nursing (Shelly and Miller, 1999, Second Edition 2006) and Spiritual Care: A Guide for Caregivers (Shelly, 2000).

The tradition of NCF summer conferences begun in 1946. For many years the conferences met at rustic Camp Li-Lo-Li, near Salamanca, New York. In 1975 separate conference in the east and west began. Westerners met at Lassen Pines Conference Center in California and Easterners at Camp Burton in Ohio. A move to InterVarsity's Cedar Campus (Michigan) in 1989 provided a central location and more comfortable facilities. Although old-timers tell nostalgic stories about mice giving birth in their suitcases, encountering snakes in the shower stalls, and braving flood waters at Li-Lo-Li as well as raging floods at Camp Burton, Cedar Campus brought a welcome change of venue.

In 1998 NCF co-sponsored a course on Theology of Health and Healing at North Park University with Judy Shelly, Joan Zetterlund and John Weborg serving on the faculty. This course was the first of a series of core courses in a Faith and Health Curriculum originally developed by Judy Shelly in her doctoral dissertation. Further courses in the curriculum continue to be added each year.

Prior to the 2000 NCF International Conference in Edinburgh, NCF staff member Judy Shelly worked with Dutch nurse-ethicist Bart Cusveller to host an international conference on nursing scholarship. Scholars representing 11 countries and four continents presented papers from a Christian perspective on nursing theory, spiritual care and nursing ethics. The ideas and relationships generated at this conference have led to plans for developing an online academic Christian nursing journal.

In March, 1990, the NCF National Council was formed to collaborate with staff to develop and implement NCF ministry for the '90's. Plans emerged to develop a grassroots leadership network of Regional Councils who "own" and build the ministry in their part of the country. These Councils are linked to the National Council and to one another for resources and support. They are also linked to NCF ministry in different parts of the world through NCF International.

The NCF Website (www.ncf-jcn.org) debuted in 1998, with Linda Kunz as the Webmaster. This has opened the way for a tremendous increase in communication among Christian nurses, as well as seekers. Faculty and graduate students can share information, including abstracts of theses and dissertations. Up-to-date information about conferences, resources and groups is now available at the click of a mouse. The addition of the online store makes it possible to order materials and register for conferences over the web.

A unique dimension in NCF ministry among students and nurses has been the integration of our faith and nursing. Through Bible studies in schools of nursing and health agencies, mentoring, conferences, and printed resources, we equip students and nurses to represent Jesus Christ in our profession.

From the very beginning of NCF, the organization has provided Christian perspectives within the national and international nursing organizations. Even before CNF was officially organized, Chicago nurses were involved with national conventions. In June 1948, CNF had a booth at the National Biennial Nurses Convention in Chicago. Since then the displays and the staff have changed, but NCF has consistently had an exhibit at ANA, NSNA and NLN conventions. Worship services, focus sessions and program speakers have also been part of our professional witness. For several years the Lutheran Nurses Guild (now disbanded) sponsored these events with us.

In 2002 the NCF National Council voted to become a professional organization, as well as a ministry. A membership fee of $65, which included a subscription to the Journal of Christian Nursing was established. By 2005 over 1000 people joined as members. We became a member of the Nursing Organizations Alliance in 2003.

Concern and involvement in world mission have been among NCF's purposes from the beginning. In 1953, an American nurse, Rebecca Glanzer, went to India to establish a work among nurses. The emerging movement became the Evangelical Nurses Fellowship of India, with Lily Bonner, an Indian nurse, as director. In 1976, Chieko Fukushima, a Japanese nurse, attended an NCF informational meeting in Philadelphia and felt God calling her to establish NCF in Japan. She spent several years continuing her education in nursing and in an NCF discipleship program in Chicago, then returned to Japan as the first NCF staff worker.

NCF-USA has learned and grown from the fellowship of Christian nurses around the world. In 1970, NCF-USA joined Nurses Christian Fellowship International (NCFI), and in 1988 hosted (for the first time) the quadrennial NCFI conference in Philadelphia. Subsequent quadrennial conferences have been held in Fiji, Hong Kong and Edinburgh, Scotland. A former NCF-USA staff member, Ruth Lichtenberger, served as NCFI General Director 1975 through 1996. Harry Louden, from Scotland, served as General Director from 1996 until 2004, when the position was dissolved because of inadequate funding for an international office and full time staff, and the International Board assumed the leadership of the movement.