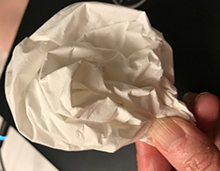 On December 26, I arrived in St. Louis to participate in Urbana, InterVarsity’s triennial missions conference. Urbana is geared toward college students; it’s a time of incredible worship, prayer, and conversation. It’s a time where the unexpected can happen.

My “unexpected” moment took place over lunch when I met “Pete.” Pete has lived in St. Louis all his life. Pete is also homeless. He had come inside the hotel to get warm. Temperatures were in the 30s with a brisk breeze. When he saw me ordering a soup and sandwich, he told me he wanted to join me. “Are you hungry?” I asked. He nodded. “I’m getting some tomato soup and a turkey BLT. Do you like tomato soup?” We talked about tomato versus minestrone soup. Eventually he agreed tomato soup was best and I ordered some for him.

Conversation with Pete wasn’t easy. His words would muddle together, but I caught phrases here and there. His thought process moved from subject to subject quickly, but I understood he liked it when I smiled. He said it made him feel at ease.

Pete’s eyes were red and swollen, and I could smell alcohol on his breath as he talked. The nailbed of one finger was bleeding and he had difficulty wiping his nose after he sneezed. Pete said he had been on the streets a long time.

As we talked, hotel security approached us and asked Pete to leave. I turned toward the security person and said, “I’ve invited Pete to have lunch with me. He’s my guest. Is it okay if he stays?” She agreed, but said Pete would need to leave as soon as lunch was over. I nodded and thanked her.

During our lunch, two of the hotel’s staff interacted with us. There was a stark contrast in the way they treated us. One showed courtesy and respect while the other had a look of complete disdain and hate. When Pete asked for a napkin, she did not move. When I asked for a napkin for Pete, she moved as slowly as she could to bring one, placing it just out of Pete’s reach. There was anger in her eyes--toward both of us.

I stayed with Pete until he had finished eating. I felt that if I left, he would be asked to leave without being able to finish his meal. As Pete finished his lunch, he said he had something for me. He opened a fresh napkin and began to fold and roll the edges. I looked and smiled. “It’s a rose!” I said. “Thank you, Pete. I really appreciate this.”

I‘m extremely grateful for this chance encounter with Pete. He taught me much in our short time together:

Thank you, Pete, for treating me to lunch. I learned so much and owe you a great deal. I will not forget you.