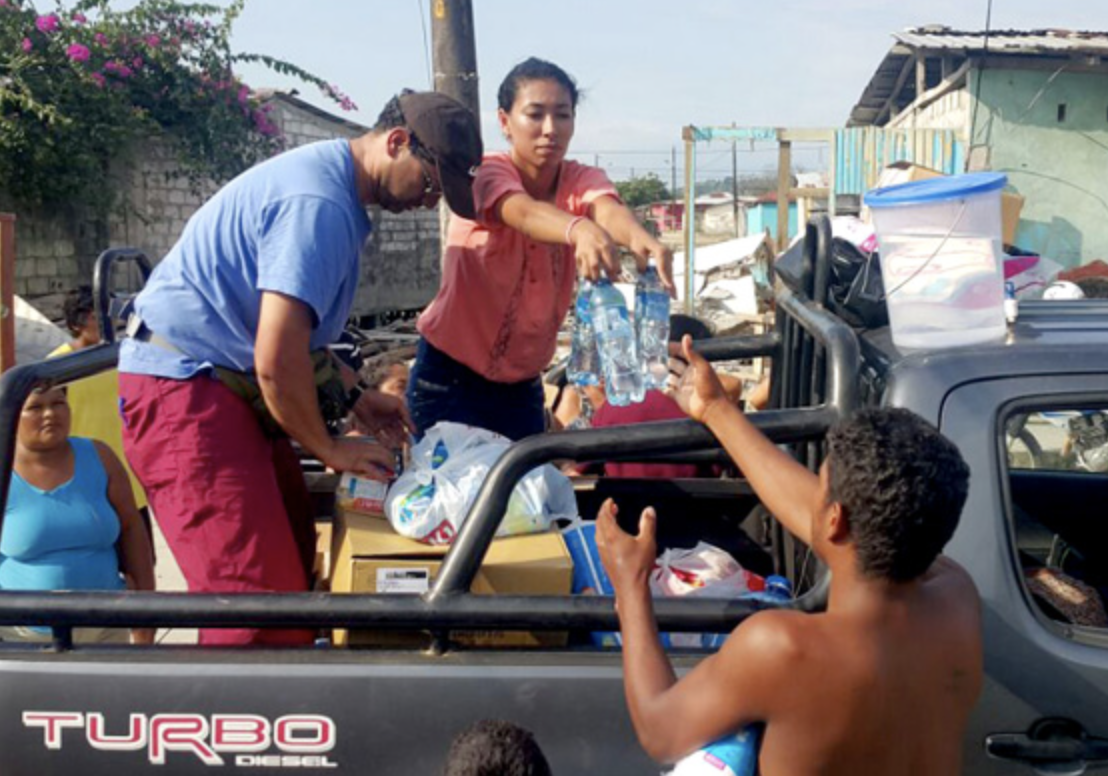 The circumstances in which a nurse can find him or herself within a disaster zone requires immense psychological, emotional, and physical strength. Arriving in the aftermath of a hurricane or earthquake, stepping into the “hot zone” of a disease, or positioning oneself only miles of a brutal war zone can be both fearful and shocking.

Nurses and other workers bear the physical and emotional burdens of the local people's pain, and  also must cope with their own surmounting questions and emotions. Numerous members of response teams acknowledge the power and presence of God, moving to accomplish work which the team could never accomplish on their own.

In deploying to Haiti post-Hurricane Matthew in 2016, some locals gave a disaster response team a field in which to set up their clinic. Two metal shipping containers sat on that field;  when the team inquired about the containers, community residents shrugged and stated they didn't know the containers' contents. When the team opened the containers, they found tarps, lights, and a generator to begin constructing the necessary cholera clinic. Nobody in the community knew how the containers got there; they just knew they had been there for years.

About a week later, another team was serving in a mountainous region of Haiti. Having arrived on donkeys, the team radioed to the field clinic to request more buckets and a generator. The ground team responded that there were no supplies left: The shipping containers had been emptied. A team member urged someone to check again--when the ground team opened the shipping containers once more, they discovered the exact number of buckets needed and a generator. The team considered this experience to be equal to the abundance of jars of oil given to a widow who was impoverished, but trusted God (2 Kings 4:1-7).

On the front lines of Mosul in 2017, a patient arrived with one leg missing and the other badly mangled. Although the triage nurse thought he should tag him black (unable to save), something prompted the nurse to instead tag the patient red (critical). Subsequently, units of blood were poured into the patient and the blood kept pooling under the gurney while surgery was delayed due to his hypotensive state. Team members questioned the resources being given this patient: Supplies were already limited. Then another team member wrapped both hands around the blood tubing and prayed for the blood to go into the patient. At that moment, the patient's blood pressure began rising; eventually the patient was stabilized and able to have surgery.

In another instance, following a double amputation, the triage nurse entered and saw the patient sitting up in bed. The nurse approached him and told him about Jesus whose blood sacrifice was on his account. The patient, hearing of his value and rescue in Jesus, said he needed to return to Mosul and tell ISIS about Jesus.

While on the field, I kept a journal. One evening I wrote:

[We were being shielded] from a war much stronger than I had imagined. Much stronger, because it becomes a war in your own soul. You fight within yourself to find strength in the outpouring of sorrow, to feel peace in the middle of chaos, to choose mercy in the face of injustice, and to show compassion at the hands of evil. And each time, I find myself inadequate, reliant on a higher power, because nothing in me is great enough to be independently strong, peaceful, merciful and compassionate. It's His word that reminds me quietly each day as He pours His spirit into me. Through my broken cracks of inadequacy, His testimony spills over onto those He loves.

While facing unknowns and situations wherein one feels powerless, reliance on God for his power and his presence is integral. Countless situations on the field have demonstrated that God's light is extremely bright in such pervasive darkness. In some of the deepest moments of need or darkest moments of loss, God shows himself sovereign and comes through for the disaster team in both provision and in power, demonstrating that he is ever present in the deepest valleys.

“Even though I go through the darkest valley, I fear no evil, for you are with me; your rod and your staff—they comfort me” (Psalm 23:4, NIV).

Maranatha Weeks, RN, BSN, is a Canadian nurse who has worked internationally since 2013 as a disaster relief volunteer. Maranatha’s disaster nursing and faith experiences are also described in her book, From the Plains of Nineveh: A Nurse on the Front Lines of Mosul, available on Amazon.

This narrative is from Maranatha’s article, “Disaster Nursing: Taking Your Faith to the Field” in the October/December 2020 issue of the Journal of Christian Nursing.

Subscribe to JCN by becoming a member of NCF. Special rates are available for students, faculty, and retired nurses.