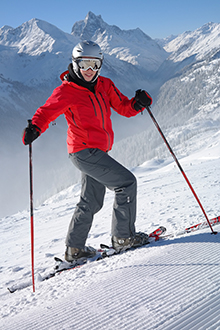 Eight years ago, I had a life-changing skiing accident. New to Colorado skiing, I was far from experienced, and during a last run down a relatively easy slope, I had a serious fall. The ski on my left leg did not detach, and the crash into the snow produced excruciating pain in my left knee. After being carted down the slope by a rescue crew, the first examination revealed an evulsion fracture of the tibia and likely torn ligaments. My left leg was immobilized in a stiff brace. The following trips to the internist for severe leg cramping in my left calf showed a blood clot, and the orthopedic surgeon explained that I had torn the three major knee ligaments, leaving little to stabilize the knee. Major reconstruction was required but would not guarantee a positive outcome; an ACL repair was the best option. However, the surgeon would not operate until the blood clot had fully resolved, which took nine months.

During that time, I learned a new meaning for pain as I dealt with wheelchairs and crutches, severe swelling and bruising. The healing process felt too long. I could walk, but the knee was unstable, and I had a noticeable limp and daily pain.

During my recovery, I meditated on Scripture and prayed. James 1:2-4 was key. We are told to count it as pure joy when we endure trials, because the testing of our faith produces patience and makes us mature and complete. Romans 8:18 notes that our present sufferings are nothing to be compared to the glory that awaits us in heaven. As I learned this new meaning for pain, I began a long, slow therapy regime in preparation for surgery.

A year later, ACL surgery and more therapy helped restore my ability to walk more conventionally, but it was a tortuous process. Therapy sessions were preceded by pain medication, and then came complications, such as plantar fasciitis and back pain. Although I regained functional use of my knee, some losses cannot be fixed. I will never be able to kneel, do a full squat, crawl, or sit cross-legged. No more sandals, high heels, going barefoot, or having nice dress shoes. And there is predictable chronic pain that comes with activities that challenge the knee, such as walking on uneven ground or sand, which causes pain for days.

Yet, through this experience, I’ve learned to be more patient and thankful for activities I used to take for granted. I’m grateful for the ability to walk and for only periodic pain. God gave me a new perspective on caring for patients with pain and for those in rehabilitation with their many complexities and variations of disabilities. I’m a better nurse and a more thankful person because chronic pain has become my reminder of God’s goodness and mercy.

Kris Mauk, PhD, RN, is a professor of nursing and the graduate program director at Colorado Christian University in Lakewood, Colorado and a contributing editor for the Journal of Christian Nursing.

This article is excerpted from Kris’ editorial in the January-March 2019 issue of JCN. The issue’s feature article is on chronic, non-malignant pain management; CE is also available. NCF membership includes both print and online subscriptions to JCN.

Learning gratitude from pain and disability

I echo praise to God for teaching me gratitude for the simple things of life like taking walks and picking flowers after years of limitations due to severe back pain and numerous surgeries. His grace has turned loss into gain. Chronic pain continues to teach me to be grateful for times of relief and helps me be sensitive to the needs of others.