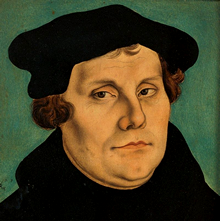 In 1527, Martin Luther was in the throes of a deep, debilitating depression when bubonic plague, or Black Death, came to his town of Wittenburg, Germany. Only the desperate needs of the sick and dying roused him to action.

Even though many fled the city, Martin and his pregnant wife, Katy, decided to stay and care for those who were suffering from this rapidly-spreading infectious disease.

Together, at great risk, they ministered to the sick. They consoled the dying. They prayed for physical healing and spiritual hope.

Through relentless grief and agony, Martin Luther became a vehicle of God’s love as he cared for his neighbors in their distress. He pastored them and nursed them, putting their needs ahead of his own. Rather than trying to avoid suffering, Luther believed that the hard times can be reinterpreted as occasions for beauty and love.

It was during this dire time that Luther wrote his most famous hymn, “A Mighty Fortress,” based on Psalm 46. This was not a battle hymn; it was about comfort and hope in times of trial, a valuable hymn for nurses caring for those who are suffering.

This week Christians around the world will celebrate the 500th anniversary of Luther’s posting of his 95 Theses on the doors of Wittenburg Castle Church, the official beginning of the Protestant Reformation. Luther is often remembered as a reformer, a pastor, and a theologian who changed the world, but there is more to his story.

As nurses, we can take inspiration from the sacrificial care Martin Luther provided for the victims of a horrible plague. And we can sing these words when we need a reminder of the hope that is ours in Christ, “Let goods and kindred go, this mortal life also; the body they may kill: God’s truth abideth still, His Kingdom is forever.”

This was so inspiring, I have studied many articles about Martin Luther, didn't know this aspect of his life. Tomorrow is Reformation Day!

What a great devotional! I am developing and implimenting a palliative care service for my health system. and Luther will be thought of throughout this journey.

Happy All Saints Day to all the Saints saved in our Lord Jesus!