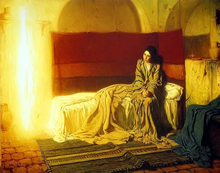 Recently I was drawn to Luke 1, the story of how Jesus and his forerunner John, came to us. As always, God had a lesson for me from his Word.

At first glance, we see similar responses of the priest Zechariah and the virgin Mary to the angel Gabriel. Zechariah had prayed for a son, but he was childless. He’d been chosen by lot to burn incense in the Temple (a once-in-a-lifetime priestly privilege!). Inside the Holy Place, Gabriel came and told Zechariah, “You’re going to have a son!” Zach’s response: “How can I be certain of this?” (vs. 18).

Six months into the pregnancy of Zechariah’s wife, Elizabeth, the angel Gabriel came to Mary. He told her she too would have a son. Mary’s response: “How will this be?” (vs. 34).

Both Zechariah and Mary were faithful God-followers (vs. 6, 30). Zechariah and his wife were old and infertile (v. 7). Mary knew she was a virgin. Both asked Gabriel (and God), “How will the impossible happen?” Zechariah is chided and made mute; Mary is offered a wonderful explanation. Why the difference?

It seems Zechariah wanted proof (wasn’t Gabriel proof enough?). He did not believe God could do the impossible (vs. 20). Mary wanted understanding. She believed, and wanted to know the plan (vs. 38).

When God shows up and asks me or NCF to join in something impossible, of great risk and radical change, pray we ask for the plan and say, “We are servants of the Lord; may it be done according to your word!”

—Kathy Schoonover-Shoffner, PhD, RN is the NCF National Director and Editor-in-Chief of Journal of Christian Nursing.

Tags:
Devotional | From the Director

Thank you for showing me the truth of God's different responses.  I pray that all of us ask for understanding when God shows up.  pam