An Airport, a Reunion, and an NCF Connection 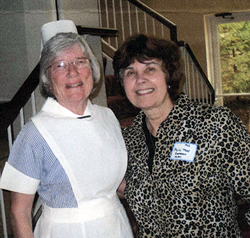 I had time to kill when my flight from Oklahoma to Pennsylvania was suddenly delayed and rerouted, so I sought out the airport chapel and prayed, committing my new itinerary to the Lord. I should not have been surprised at what followed.

Arriving at Chicago, I settled in with a book and waited at the gate for my connecting flight. After some time, I noticed another woman about my age across from me. Occasionally our eyes met and we finally struck up a conversation. Carol was from California and, like me, was a retired nurse. Years ago she worked for Nurses Christian Fellowship and had also served as a public health nurse in Philadelphia. While there, she had roomed with Dottie, my “Big Sis” in my nursing program! Amazed at the events that had brought us together, we agreed that these circumstances were clearly from the Lord.

Then Carol asked me if I have ever done a prayer walk. I said yes, but it had been several years. Carol said, “Let’s do one now.”

So we walked together from gate to gate, quietly praying for people we saw. Whatever the Lord put on our hearts, we voiced back to him in prayer. We don’t know the results of our prayers in the lives of those people, but we’re convinced Jesus is working in them across the world.

The several hours passed quickly. We were seated on opposite ends of the same plane, but I sensed that our combined prayers continued to be lifted to the Father. At the Allentown airport in Pennsylvania we said goodbye, marveling how the Shepherd brought us together to do his work.

Later that week I attended a nursing class reunion honoring the Class of 1961, one year ahead of mine. There I reconnected with Dottie, my “Big Sis,” and I told her how I met Carol and about our prayer walk through O’Hare airport. Then, as each of Dottie’s class was recognized and given a chance to share a few comments, one of Dottie’s classmates stood to speak.

She said, “The greatest thing that happened to me in nurses training was not acquiring the knowledge and skill to be a nurse, but it was accepting Jesus Christ as my personal Lord and Savior. I was not a believer when I arrived, but the consistent friendship of the girls in Nurses Christian Fellowship brought me to the place where I could believe and accept Christ. And it has made all the difference in the world to me.”

What has been the impact of Nurses Christian Fellowship? It’s far more than we can dream or imagine. How has The Shepherd led us? In paths we could not expect. What started out as an annoying interruption in my plans turned out to be an amazing learning experience of the love and sovereignty of Almighty God.

Our "God instances", instead of coincidences, continue to astound me. I was @ an End of Life planning seminar a week ago when I met Peg. we sat next to each other and found that we had a mutual friend in common. A few moments after that discovery, I received a text from a church sister, the daughter of our mutual friend,saying that she had just had a heart attack. Peg and I immediately joined hands and prayed fervently for our friend. And of course, each time that I received a new text, updating us, I shared with Peg, and we lifted up our friend, who both of us had been witnessing to, about the saving grace of our Lord. Now, a week post CABG, our mutual friend is on the mend, and a few steps closer to accepting Jesus. Praise God for his divine intervention!
Who is the nurse in uniform in the pic. She looks like one of my classmates from WSH, Oak Park IL. But we have all changed as we age so I am not sure. Eleanor Edman